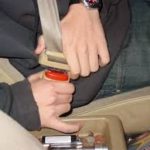 As many of you likely know, whether you wear a seatbelt in New Jersey has been a hot topic in light of actor and comedian Tracey Morgan’s claim against Wal-Mart stemming from his June 7, 2014 tractor trailer accident. Wal-Mart’s lawyers have alleged in Court filings that Mr. Morgan’s failure to wear a seatbelt may have caused or increased the extent of his injuries.
Now comes the New Jersey Supreme Court to weigh in on the issue in a criminal case, State v. Lenihan. The Supreme Court ruled that the seatbelt law, which normally is a summary offense, can be the basis of a criminal action if it is coupled with N.J.S.A. 2C:40-18 which makes it a crime to recklessly violate a “law intended to protect the public health and safety.”

In the case, Defendant Lenihan was deemed reckless because she was high from “huffing.” She was charged with vehicular homicide but pled guilty to recklessly causing bodily harm. The New Jersey Supreme Court upheld her guilty plea because she was intoxicated and failed to ensure that her 16 year old passenger was wearing a seatbelt. The passenger died several days after the auto accident because of severe injuries. The NJ Supreme Court determined that the seatbelt law is a law intended to protect public health and safety.

Whether this ruling will find its way into New Jersey civil personal injury or wrongful death cases remains to be determined, but not unlike Wal-Mart’s lawyers, insurance defense lawyers will try to use this case to their advantage when defending a case in which the injured victim failed to wear a seatbelt. Needless to say, it is important that you have an experienced New Jersey Auto Accident Lawyer if you or a family member is injured or killed in an accident. Call or text me at 609-277-3166 if you are seeking legal representation. Free Consultation!