Texting and Driving and Other Dangerous Distractions 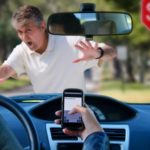 As everyone knows, the debate has shifted its focus to texting and driving and speaking on your cell phone. According to the National Highway Traffic Safety Administration, driver distraction in 2010 was the cause of 3,092 fatal crashes, which represented 18 percent of all vehicle fatalities that year. Distracted driving was also the cause of 416,000 injuries that year. According to a Pew survey, 40 percent of teens admitted to being in a car while the driver was being distracted from talking on a cell phone. One study found that texting while driving increases the risk of an accident by 23 times. This is an incredible statistic.

Each state is primarily responsible for enacting its own driving laws. As a result, laws against texting and driving and other forms of distracted driving vary from state to state. As a Wrongful Death and personal Injury Lawyer licensed in New Jersey and Pennsylvania, I, in particular, keep up on the driving laws from these jurisdictions. This past summer, New Jersey passed legislation that increases the fines for talking or texting on a handheld cell phone while driving. The law also enables judges to suspend driving privileges and assess points for a third or subsequent offense. Cell phone use has been a primary offense in New Jersey since 2007, which means that a police officer may pull you over just for the improper use of a cell phone. Previously, an officer could only issue a citation if the driver was pulled over for a different traffic violation. This year, New Jersey also passed Nikki’s Law, which authorizes the posting of traffic signs reminding drivers to not text and drive.

Incidentally, you may be held responsible for an accident even if you were not driving. You may be deemed at fault for an accident if you knowingly texted a message to someone you knew was driving. This rule was established by the Superior Court of New Jersey, Appellate Division in the case of Kubert v. Best. Although this case originated in New Jersey, there really is no reason to believe that a Court from another state would not adopt its reasoning, especially with texting and driving being the focus of considerable public debate.

In Pennsylvania, a further ban on texting and driving took effect on September 5, 2013. The law made it a primary offense, which differed from the previous anti-texting law enacted in 2012. Unfortunately, the current law only provides for a $50 fine, which is not much of a deterrent, and considerably below the penalties and fines enacted in New Jersey. Interestingly, a complete ban on cell phone use while driving was part of the bill that passed the Senate, but it was ultimately stripped from the bill by the House.

They are simple propositions, don’t text and drive or talk on your cell phone while driving. If everyone followed these basic principles, many lives would be saved and injuries would be prevented. However, if you or a loved one are victims of distracted driving call or text me, Joseph Monaco, at 609-277-3166 in New Jersey or 215-546-3166, in Pennsylvania for a Free Consultation.